The most easily accessible monastery to the visitor of Arcadia!  It is built exactly at the entrance of the Tanou field, close to the village of ancient Evas, which is surrounded by the mountains of Zavitsa, Helleniko and Paeopanagia and located 4 kilometres from Mesogocea and 7 kilometres from Astros. The name is delivered from Latin word Lucus which means sacred forest. On the walls of the edifice ancient carvings and stele are visible and according to archeological and historical evidence proves that the monastery was built on the exact spot of an ancient christian church. The monastery combines an aura of hellenistic and christian civilisations as an aqueduct dating from the Roman era is located on the grounds. For the nature lover and hiker, there is a path which begins at the monastery and leads to Ancient Helliniko via a fantastic forest route.

Above of the river Lucius, at the base of a tall and wild rock and almost opposite the Philosopher’s Monastery, dominates the historic monastery of St. John the Baptist.  Built in the 16th century and is now among the largest and most historic monasteries of Peloponnese. It is a male monastery and has most monks in relation to other monasteries of Arcadia. According to tradition, the foundation dates back to the mid 12th century (1167). The monastery has a valuable library with important theological and philosophical books. In Priory and Arhondariki are old photographs, religious persons and letters of Kolokotronis. Today the monastery flourishes and attracts many pilgrims. Access to this can be done from Stemnitsa, Dimitsana through Palaiochorio from Greek and Trail through the gorge. The monastery has hostels where visitors can stay overnight. It is 39 km. From Tripoli. From the monastery descends Lousios path crossing the gorge. The closest route reaches the Monastery Philosopher among lush vegetation. Going down the river and an idyllic location, small bridge passing on the opposite bank to the point where the riverbed narrows and the water flowing rapids forming funnels. Another longer route leads through preserved trails to ancient Gortys. This route takes about three hours.

The first monastery was founded in 717 AD Built Parnon, near the top of Malevou, it named Malevi. It is dedicated to the Virgin Mary.  In Malevi lived from 1601 to 1651 N. Terzakis the Nile name, and after his death he was sainted and celebrated on May 7 in his home in St. Peter Kynouria, while the monastery is celebrated on 12th November repose. In the battle between the Greeks and Turks in 1786 destroyed the monastery because the monks fought against the faithless. Those monks who survived the battle of Malevi dispersed to other monasteries. The monastery was changed from male to female in 1949 with three nuns being sent from the Monastery of Top Chrepas. During the Occupation rebels used it as a hospital and the German was hit by airplanes. A few years after it was destroyed by an earthquake began. 1968 was construction of the chapel of St. Nile. In the monastery there is a miraculous icon of the 70, painted by Luke the Evangelist, which since 1964 gushes Holy Myrrh, thanks to which many patients are cured. The miracles of the Virgin in this Monastery are innumerable. 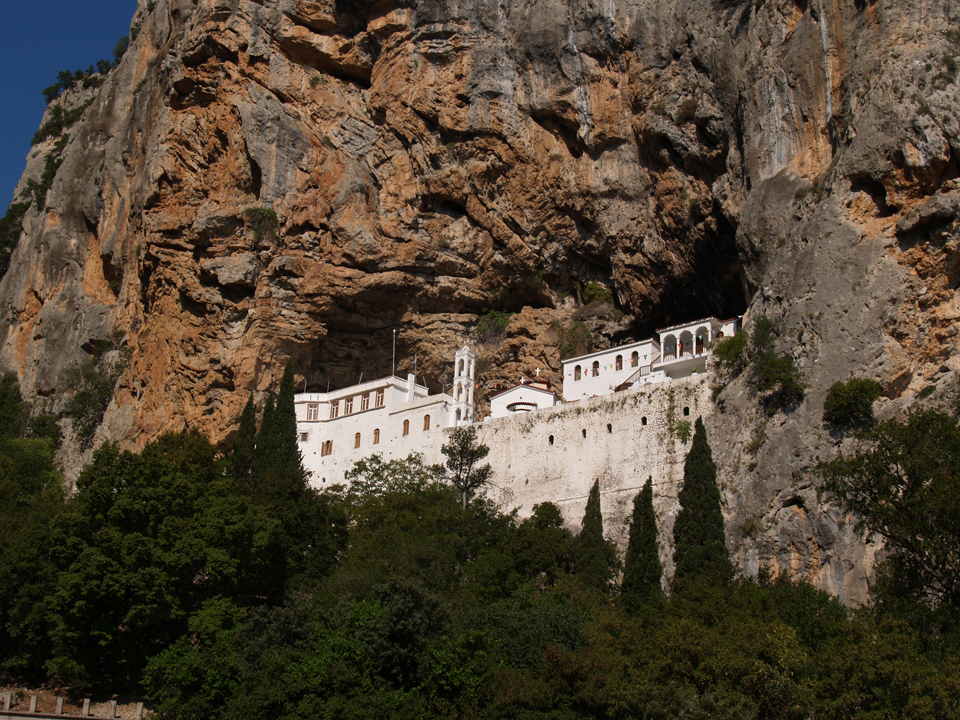 Hooked on red rock southwest of Leonidio seems unapproachable. One and a half hour walk, much faster drive, but will come Agios Nikolaos of Syntzasagkomachontas. But it is worth the sacrifice. Among the huge rocks will see a visitor the white cells, the cross-shaped church with carved iconostasis and the holy icons of 1650. He will show the vertebra of a crocodile in the library and of course from there up the Lenidi unique views. The first written records about the history of the monastery dating from 1628 onwards. Today is nunnery. The nuns will find almost everything in a dependency of the Monastery Agios Charalambos, away from Leonidio on the road to the monastery.