The castle located on the south summit of the hill called “Nissi” was built in the Medieval period and was later remodelled as a strong defensive complex. In the 18th century, the three Zapheiropoulos brothers, merchants living abroad, returned to their home town to fight for the Greek revolution and built their houses inside the caslte. The 5th Ephorate of Byzantine Antiquities has restored the NW gate, the stairway leading to the central gate, and the crumbling sections of the enceinte. 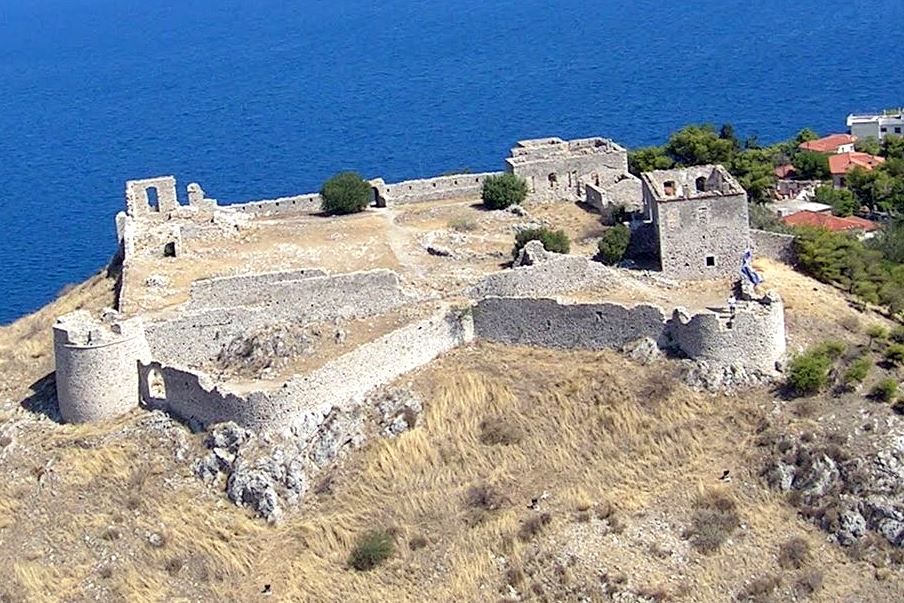 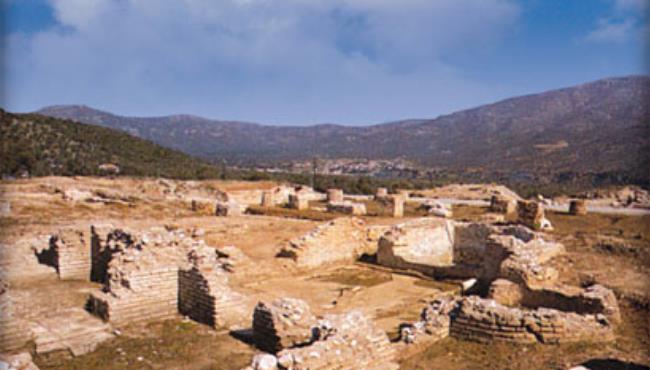 One of the most important monuments of The Roman Times is situated in the ancient village of Kynouria, Eva, whose remains are rescued. The location of the Villa is extended to 20.000km2, a little far from the village Kato Doliana and opposite the Monastery of Loukou and it is one of the richest findings that were discovered initially by the traveller Leake and later by the archaeologists Theodoros and George Spyropoulos. The latest archaeological find was the pillar with the names of the victims of the Marathon Battle. This finding proves the relationship of origin between Herod and Marathon and it was about his later creation. Herod of Attica was a philosopher, politician and lover of works of art and extended his father’ s villa to Eva with aquaducts, baths, statues. The villa compromises the greatest monument of the Athenians hero-worship as it is located in a great landscape with fertile ground, several quarries and was a museum of ancient art. The villa, sample of a special architecture and construction has an atrium, artificial ditch-river, three paths, mosaic floors and pillars.

The fortress of Palamidi is a true architectural masterpiece which proudly stands 216 m above sea level. In order to reach it you have to climb all of its 999 steps carved into the rock. The view from here is totally rewarding! This fort was built during the Venetian occupation in the early 19th century and consists of eight bastions. The Venetians named the bastions ancient Greek names, such as Leonidas, Miltiades, Achilles, Themistocles, to give emphasis on the strenght of the castle. The beautiful chapel of Agios Andreas is built within the central bastion, which was the best equipped of all the bastions and hence was used as the main headquarters. Palamidi was also used as a prison for a period of time. In 1833, Theodoros Kolokotronis, one of the Revolution leaders was imprisoned here, charged with high treason. 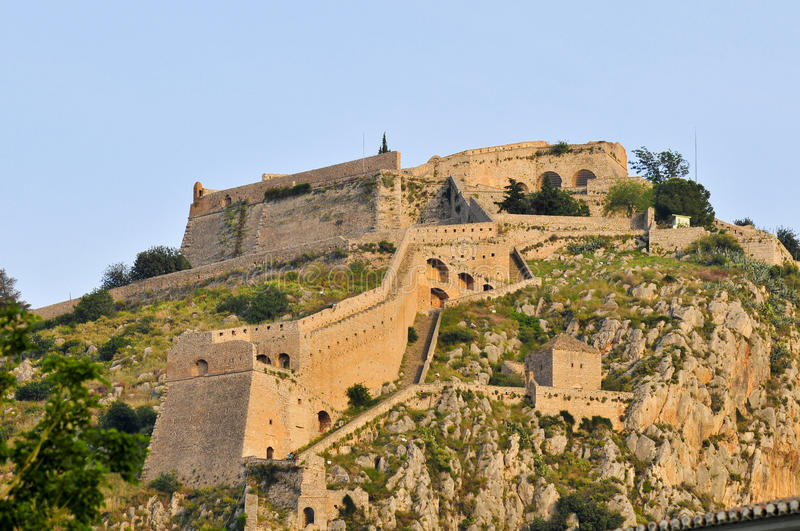 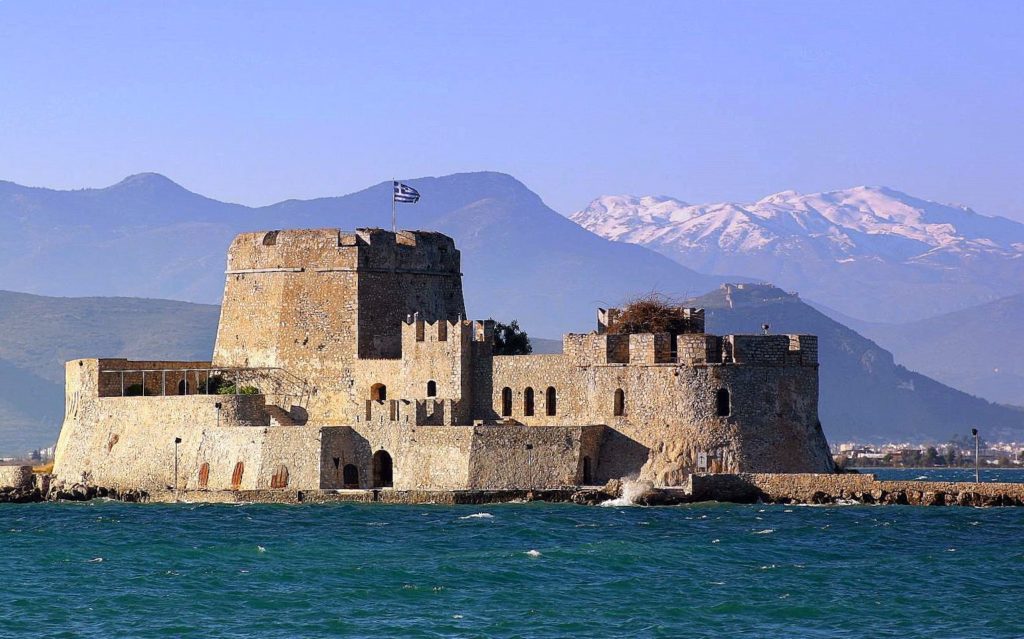 Bourtzi “The Castle of the Throne”

Castello dello Sogio was the first name of the Venetian castle, which along with Palamidi, is considered one of the landmarks of Nafplio. Nevertheless, the name that finally prevailed is Bourtzi, which in Turkish means « Island – Fort ». During the Venetian rule it was connected to Akronafplia through a huge metal chain that secured the port against enemy ship attacks. In the beginning of 1860 Bourtzi was the home the executioners of Palamidi prisoners. In the summer you can reach the fortress by boat departing regularly from the port. If you are lucky enough, you may even be able to attend one of the fascinating festivals taking place on the islet!

Akronafplia is the oldest part of the city of Nafplion in Greece. Until the thirteenth century, it was a town on its own. The arrival of the Venetians and the Franks transformed it into part of the town fortifications. Later, part of it was used as a prison. 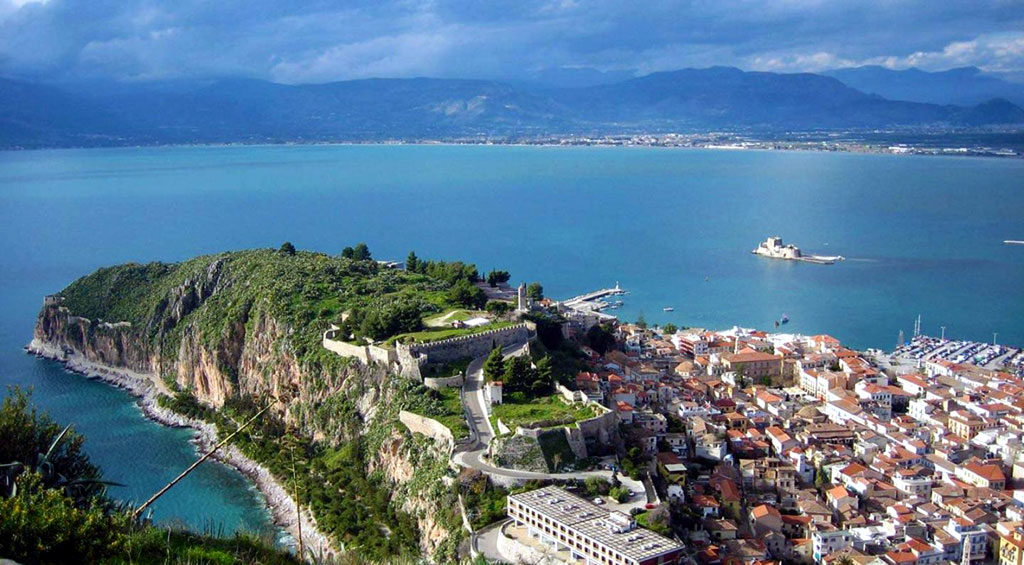 is located about half hour from Nafplio.  It is one of the most important sanctuaries of the world. There took place the first Olympic Games in 776 BC in honor of Zeus, while the area got its name from Mount Olympus, which was the house of gods. The Temple of Zeus in the center of the sanctuary was regarded as one of the Seven Wonders of the Ancient World. The sanctuary, known as the Altis, consists of an unordered arrangement of various other buildings. Enclosed within the temenos (sacred enclosure) are the Temple of Hera , the Pelopion, and the area of the altar, where the sacrifices were made.

Olympia was also known for the gigantic ivory and gold statue of Zeus that used to stand there, sculpted by Pheidias, which was named one of the Seven Wonders of the Ancient World by Antipater of Sidon

Epidaurus is one of the most popular archaeological sites in Greece. Located on the north eastern side of Peloponnese, in the region of Argolis, Epidaurus Greece is mostly famous for its Ancient Theatre. This theatre was constructed in the late 4th century BC to host religious ceremonial events in honor of god Asclepius, whose healing centre was located few steps away. Famous for its symmetry and the incredible acoustics, this classical theatre is surrounded by lush greenery and gives nice view to the valley below. In summer, it hosts performances of ancient Greek drama. 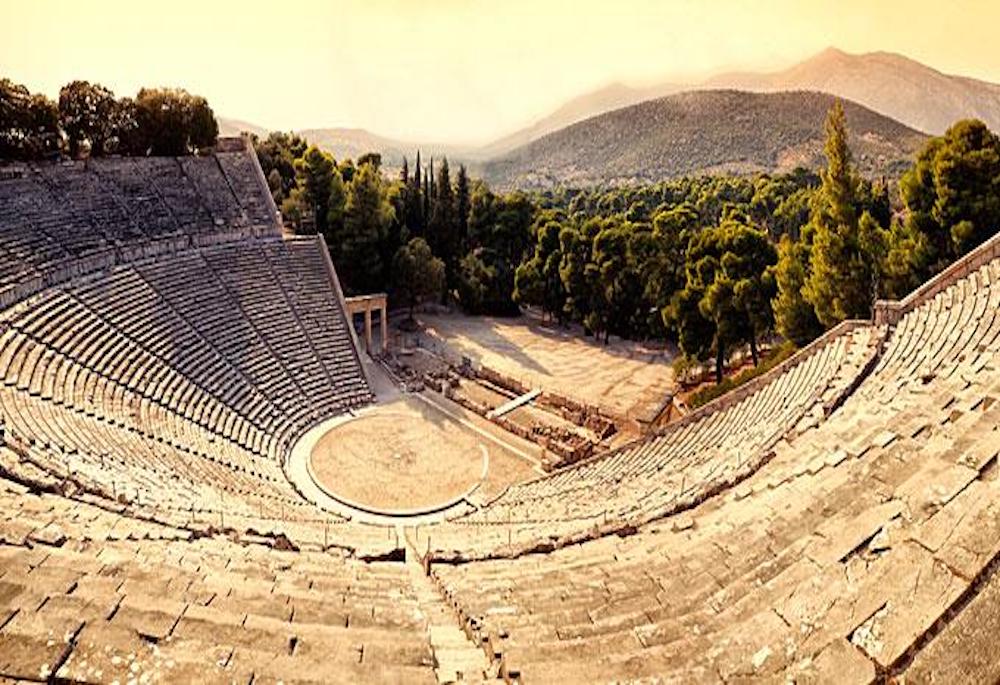 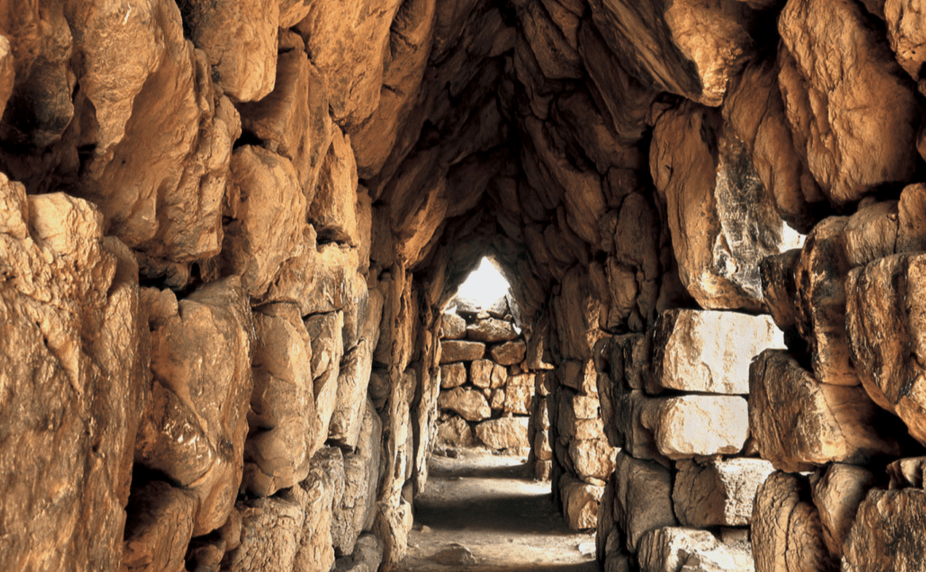 The low hill of Tirynth, in the 8th kilometer of road Argos-Nafplio, was continuously inhabited from the Neolithic Age to Late Antiquity. In prehistoric times, the area flourished mainly during the early and late Bronze Age. In the second phase of the EH era (2700-2200 BC) a major centre with dense population and a unique construction circular building, 27 meters in diameter, must have been here on top of the hill. During the Late Bronze Age, Tiryns fortified hill gradually and surrounds within the “Cyclopean” walls of the palace complex and other buildings used primarily by the ruling class as places of worship, warehouses and workshops as well as residences. In historical times, Tiryns, although it should have been in the form of an organized political community, could not compete with Argos, which destroyed it, in the first half of the 5th century, exiling its inhabitants. The walls bounding the citadel of Tirynth were built in three main construction phases and fortified gradually whole hill from the south-highest to lowest north-sixes. Red and gray limestone found abundant both on the same hill as the hill of Prophet Elias east of the citadel were used as a building material. The size of the boulders which were mainly used for the walls of the third phase caused wonder and admiration to antiquity, which is directly reflected in the myth of the Cyclops. The boulders weigh several tonnes justifying the view of Pausanias (II, 25, 7-9) that neither pair of mules was able to move the smallest of them.

Village built near the ancient town. Symbol of heroic Greece with a global reputation and radiation, the “Rich in” Mycenae surrounded by the magic veil of myth of Atreidon, whose adventures ancient tragic story. According to mythology, the founder and first king of Mycenae was Perseus, son of Zeus and Danae. The hill of Mycenae has been inhabited since the Neolithic Period. The city, which has seen the highest peak during the Late Bronze Age, was the most important center of the Mycenaean civilization, which extended to almost the entire Greek peninsula and beyond in the period 1600-1100 BC Mycenae inhabited as in 468 BC, when occupied by Argos. The citadel repopulated the 3rd century. B.C. However, the space was abandoned well before visited Paysanias (2nd cent.). O modern settlement has 422 inhabitants. B in a distance 24 km from Nafplion. 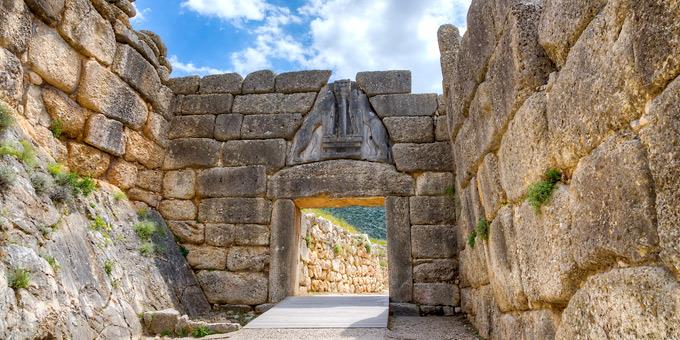 The prominent position of Midea between Mycenaean centres of Argolida has been focusing emphasis by researchers of the Mycenaean civilization. Midea is considered as the third most important fortified Mycenaean Acropolis of Argolida, after Mycenae and Tiryns. The cyclopean fortifications, the findings of recent excavations, the position of the mythology and its connection with the extensive Mycenaean cemetery in the neighbouring Dendra, rank Midea in the major Mycenaean centres of the mainland. The Acropolis is built on top of a conical hill at an altitude of 270 meters from the sea and 170m from the surrounding area .It is located in the middle of the distance between Mycenae and Tiryns dominating the eastern outskirts of Argolida plain.  Its strategic location, with the uninterrupted view provides the ability to control the entire plain and Argolikos bay. This explains mainly the development and prosperity of Midea during the Mycenaean era. 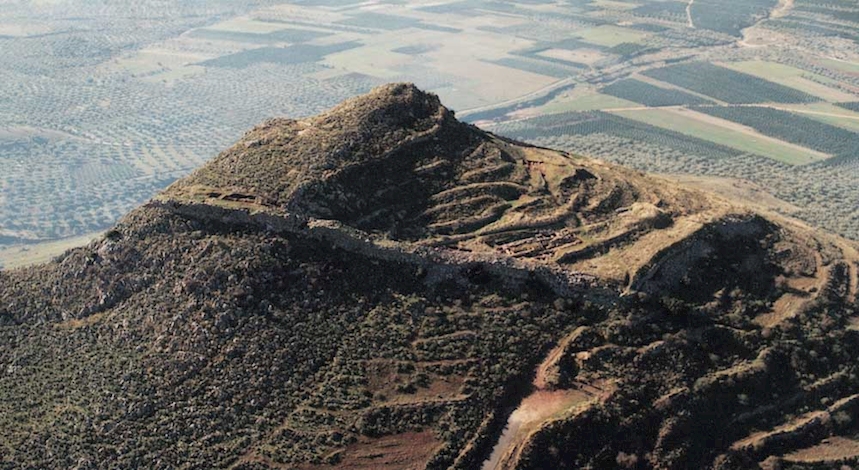 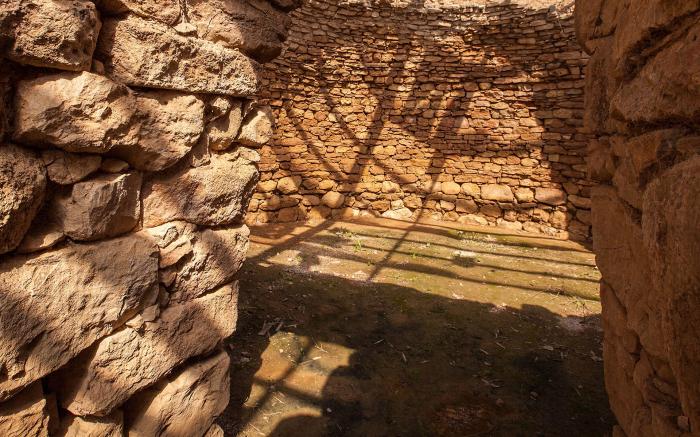